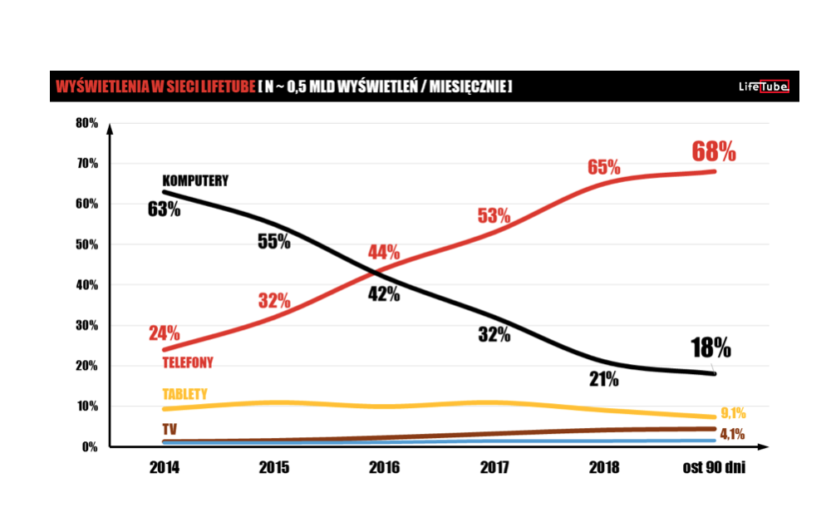 When you think of watching video on YouTube, probably one of the first associations is looking at a computer screen. Because at LifeTube, we believe in hard data more than connotations – We’ve looked at what devices videos on the channels of over 500 of our creators are viewed on. It found that as many as 77% of YouTube video viewers watch… on mobile devices!

68% smartphones, 18% computers, 9% tablets, and 4% TVs (pictured above) – that’s exactly the current balance of power among the devices viewers of our networked channels use to watch YouTube. It has changed significantly in the last few years, exactly parallel to „the aging” of Generation Z and Millenials. 5 years ago the situation was quite the opposite – 63% of video views came from computers. The intersection happened in 2016, when mobile and desktop met at the same level. Then the use of phones to watch YouTube skyrocketed, leaving desktop devices far behind.

Another variable we looked at is watchtime, which is the average time our creators’ videos are watched on specific devices. Although computers rank higher in this case (the average watchtime is 6 minutes and 39 seconds, which is almost three times more than in 2014), phones are doing very well – the average viewing time per video on YouTube in this case is as much as 4 minutes and 25 seconds. 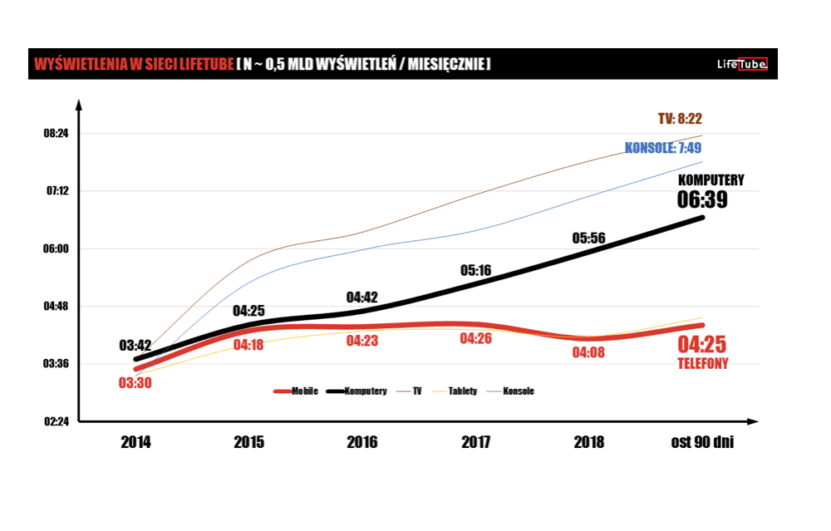 Watching YouTube on mobile devices seems like a natural process, because in addition to being the second largest search engine in the world, it is also a social media (which is often forgotten). This is indicated, for example, by IRCenter research “Social Media 2017″, which shows that as many as 92% of Polish Internet users actively use this platform (from Facebook 89%)! Additionally, YouTube is a medium that engages twice as much as Facebook. LifeTube’s analysis was conducted using 400 posts published in 2018 by 10 selected creators who actively use the „Community” tab on YouTube and maintain a Facebook fanpage. Engagement rate was just under 12% for Facebook and over 25% for Google’s service.

„The transition of users to mobile involves the creation of new vertical formats – YouTube is not only about videos, but also recently YouTube Stories, which publishes short videos or photos in a vertical format, and the tab Community, which works similarly to Facebook wall. Although vertical video is now a thriving trend, natural and native to mobile devices, YouTube on mobile is still very much viewed in a horizontal format. This platform is galloping not only in terms of reach (reaching an audience), social mechanisms (engaging an audience) or watchtime, but remains a bastion of horizontal video.

The fact that phones now accompany us all the time is nothing new. Now we also know that, along with these, we are accompanied by YouTube. As a prediction for the coming years, we can in turn take data from the EU Kids Online 2018 report, which shows that as many as 18% of children and teenagers in general (!) do not use computers to access the Internet. 82% of them use a cell phone for this every day – you are probably not surprised?