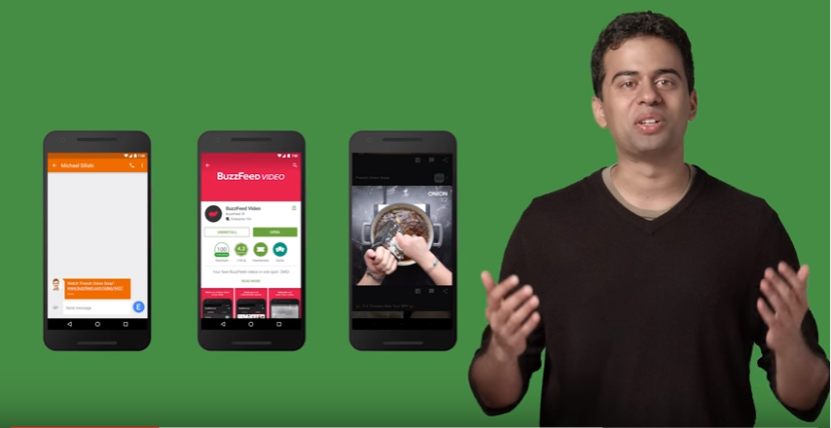 „What if I could use multiple applications without having to download them all to my phone?” – asked on Wednesday during the Google I/O Conference Michael Siliski, product manager at Google. The Internet giant has just announced a revolution in the distribution and use of mobile applications not seen since the launch of Google Play (2008) and is preparing the next step to merge the mobile and web into one.

What matters for the user is here and now

Instant Apps seem to be first and foremost a way to meet the growing expectations of users, who want to take advantage of the possibilities of the Internet and cell phones immediately, anywhere and at any time. Many times performing a certain action offered by available mobile applications may be inconvenient due to limitations such as:

– need to install (space on the phone or memory card);

– the need for a single action, without having to keep the application on the phone (e.g. buying a bus ticket or parking ticket while in another city).

All of the above constitutes the so-called. “shop discovery” for which the introduction of Instant Apps will be a significant acceleration. Many times we are wandering around the store looking for things that interest us or we do not know if a particular application will meet our needs. Instant Apps will quickly and effectively allow us to verify this.

Is this the end of mobile applications as we know them?

The end of no, a breath of fresh air – for sure. The emergence of Instant Apps has great potential to be a completely new approach to the distribution and use of mobile applications, but the core of the applications and their usability will remain the same. Google is pushing hard to bring the worlds of mobile apps and desktop web closer together.

However, it is an undeniable fact that dedicated applications are often the only friendly way to use the services offered there. This is happening m.in. because the responsiveness of many websites still leaves much to be desired, and their complex structure is easiest to reflect in the application.

Looking at it from the other side, Instant Apps does not have to be treated as a threat to applications, but perhaps even as a new opportunity for faster and more effective contact with the customer and increasing conversions. For example, the transaction process in online stores is likely to be significantly simplified, and marketing will be even more based on geolocation and personalization of the message.

Google announced that Instant Apps service will start this year, but the specific date was not given. In the meantime, while the giant refines its new idea, it must also be well received by developers and give them the opportunity to quickly adapt existing applications to the idea of Instant Apps.

Mobile application market is growing rapidly and it is estimated that this growth will be even faster in the next years. According to a report by App Annie, over the next four years the number of downloaded applications will double, reaching a dizzying 284 billion in 2020. And compared to 2015, the number of smartphone users will double during this time.

Such strong growth is dictated by both the use of modern technology and mobility in newly emerging markets and the strong adoption and adaptation of applications in existing ones. Not without significance is also the growing share of mobile traffic in the e-commerce industry and the increasing share of mobile payments in online transactions.

For businesses, mobile apps still remain one of the most proven solutions for building relationships, interacting directly with customers and shaping the path of their experience with a brand, as well as building awareness and generating revenue.